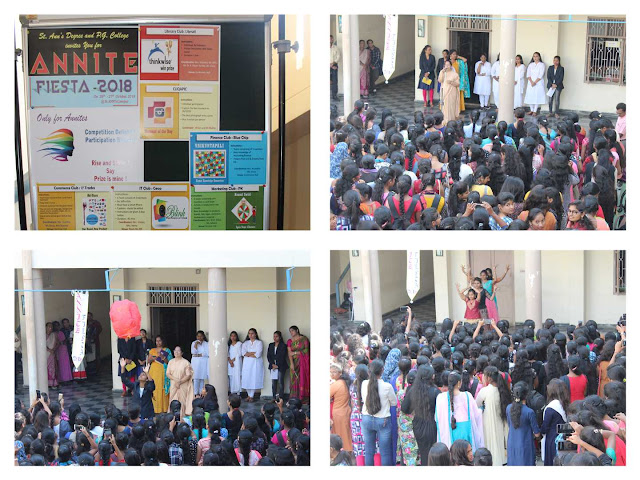 Finance Club, Blue Chip conducted  “Vaikuntapali” a game of snake & ladders – with a difference. The objective of the game was to assess basic accounting and finance knowledge of B.Com and MBA students through the board game. 7 teams consisting of 5 members each were the finalists. The snake and ladder board was drawn on the floor and a few number squares had both a snake and ladder. One girl from each team represented a coin and took position on the board. In each round the number the team got from the throw of dice was the moves to be taken on the board. If a team landed on a number square which had both ladder and snake, they were asked a question from Accounting/Finance. For a correct answer they moved up the ladder and for a wrong answer they came down the snake. The team which was at the highest number square after 8 rounds was declared winner. The participants thoroughly enjoyed the game. 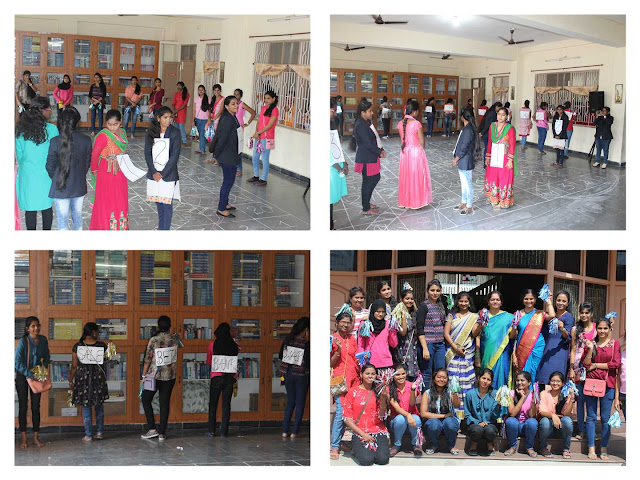 To develop students' Digital Citizenship Skills GEOP Club had conducted a competition named " BLINK - THE POWER OF CLICK" . It is an activity that involves a group of 3 students solving and capturing 15 challenges given by the GEOP Club . Total 25 teams participated both from P.G. and U.G. 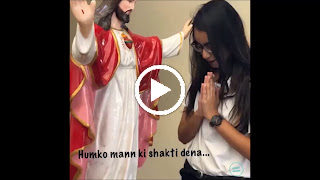 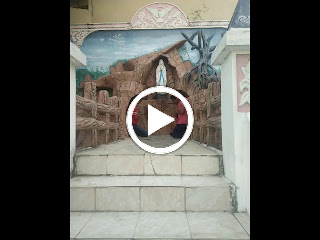 HR club organized ‘Mask’a-‘Task’a : Role playing Competition. 58 participants were registered. A Preliminary Round was conducted on 25 Oct, 2018 and 40 participants were shortlisted. Following rounds were conducted on 26 Oct, 2018 for the shortlisted participants - Bol Lady Bol round (JAM session)  and “Mask” a -“Task”a, (a role play)- Students were paired randomly by the organisers and given their roles and situations beforehand.U. G students had no language barrier as their situations were in social context,while P. G students were given situations from Organisational context. Criteria for Judgement were the 3 C s: Confidence Content Communication.
The Winners:
U. G: Sonia Patel B.Com III C, Preethi Vaidya BCom I C – 1st Prize
P. G: A. Sindhuja MBA I A, MasarathUnnisa MBA I B – 1st Prize 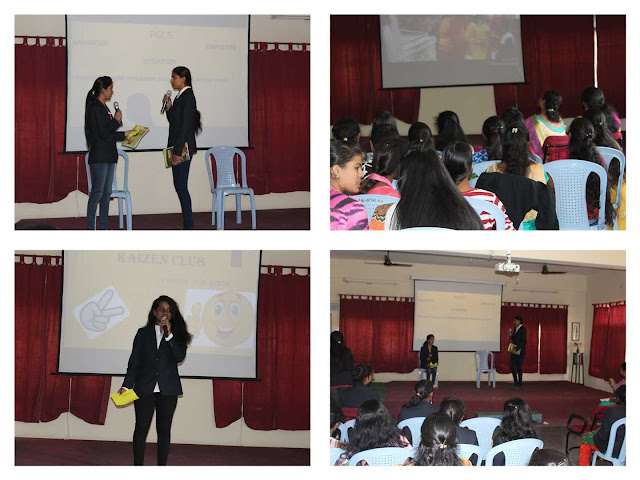 Commerce Club @ Trades conducted a competition titled “AD-STARS” for both UG & PG students to test the advertising skill among students. All the teams were asked to come out with advertisement of their own creative products for the given brands. For example: Nirma, Boost, Dove, Johnson etc…
The Winners were:
PG:  MBA II Year:  Manatha , Kavya, Gayatri,Sunanina,Lahar                           :  I Prize
MBA I year: A.sneha,Sushma, Geetha Bhavani,B.Pravalika, R.Pravalika   :  II Prize 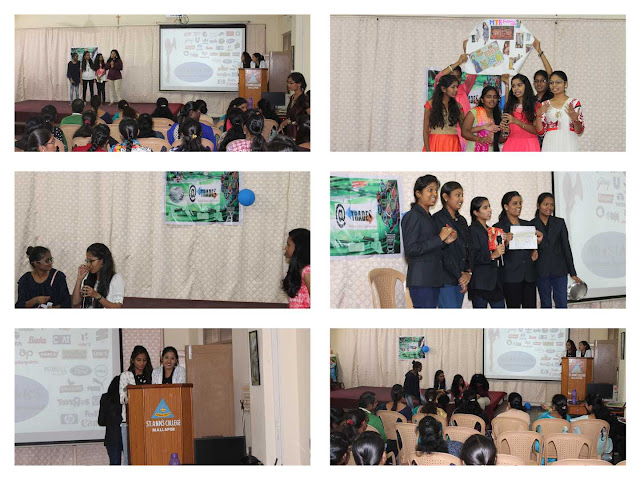 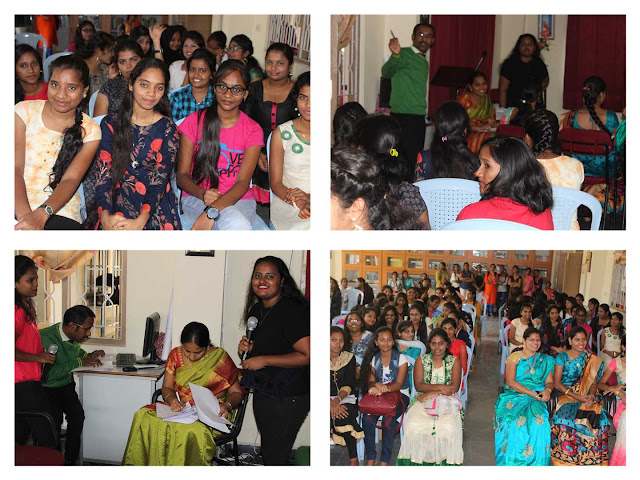 Brand Swirl is a digital Spin game conducted on 26th October 2018. The competition was Group activity held in 3 rounds - “Spin to Win”, “Ringa-Ringa Roses”, “Audio spin”.   14 teams participated in the competition.
The winners of the competition were 4 teams 2 from PG and 2 from UG 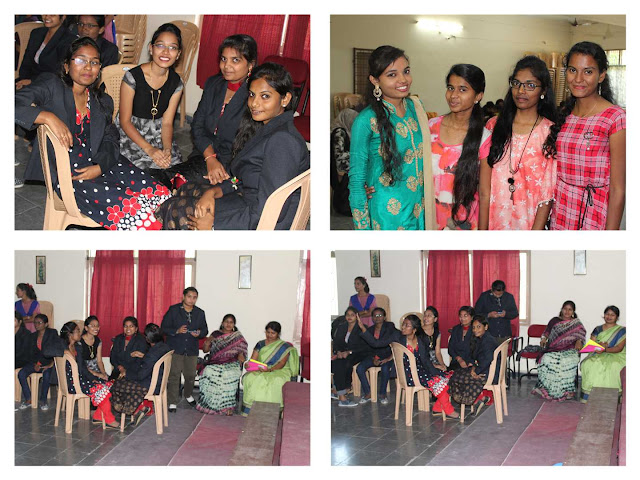 Startup  club organised a“Startup Idea competition" titled  ‘ Be Bold You" to encourage students takea first step towards entrepreneurship.There was an overwhelming participation by the students of both post graduation as well as under graduation under two different categories.42 teams participated enthusiastically and 26 of them were screened in the preliminary round and promoted to the next round. A preliminary round was conducted on October 26, 2018. Final round was conducted for the shortlisted participants on 27 October 2018.
Winners:
UG: Ms. Srujana& Ms. Ragini B.Com Computers 2nd year   – 1st Prize
Ms. Samreen & Ms. FariyaB.Com Computers 2nd year- 2nd Prize 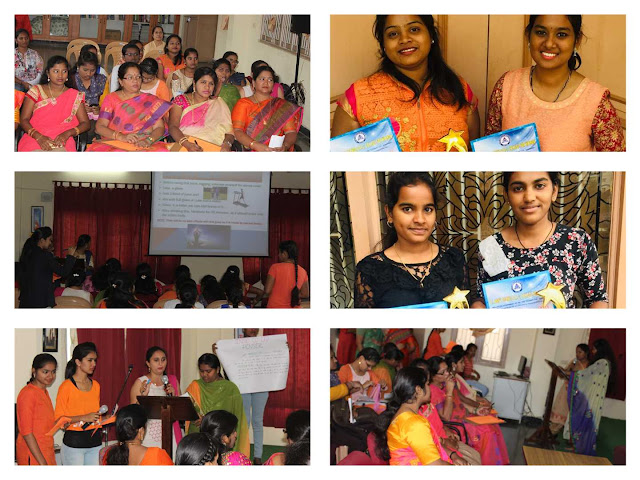 Sci-phi club organised a quiz competition " TEEKSHANA" to test their General knowledge, logical reasoning and thinking abilities. Three rounds were carried out - odd man out , geomentrical dumbsharades and logical reasoning. 51 teams  consisting of 102 participants registered.  Due to this overwhelming response for registrations, a preliminary round was conducted on October 25, 2018 and 39 teams were shortlisted. Again three rounds were conducted on 27 October 2018, for the shortlisted teams. 7 teams reached the final round. 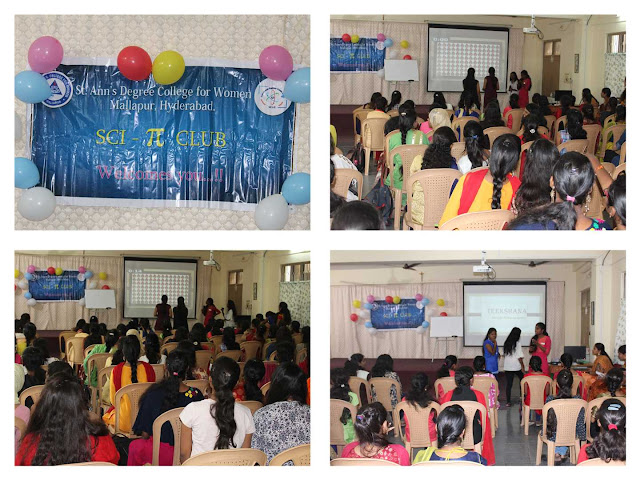 Literati club considers success and communication are very closely related with each other. In today's competitive world, good LSRW (listening, speaking, reading and writing) skills provide the right key to success. These skills are required to maintain relationships and better understanding which are vital in both personal and professional life.

With these thoughts in mind Literati club conducted Think Wise Win Prize Competition for Annite Fiesta 27/10/2018
In this competition the students have to listen to an audio and recognize the voice of the person speaking in the audio, within 30 seconds, then a picture is displayed and the participant should describe the picture in 1 minute. Our dictum was to amaze the student in such a way that he essentially come to a conclusion that exceptional Listening and Speaking skills ensures success in his/her personal and professional life. 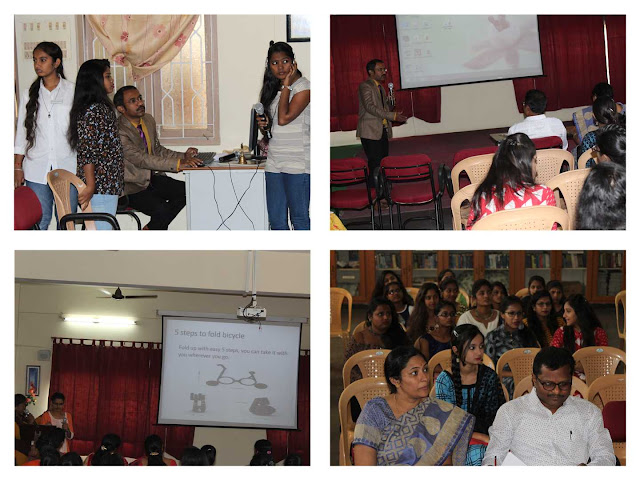 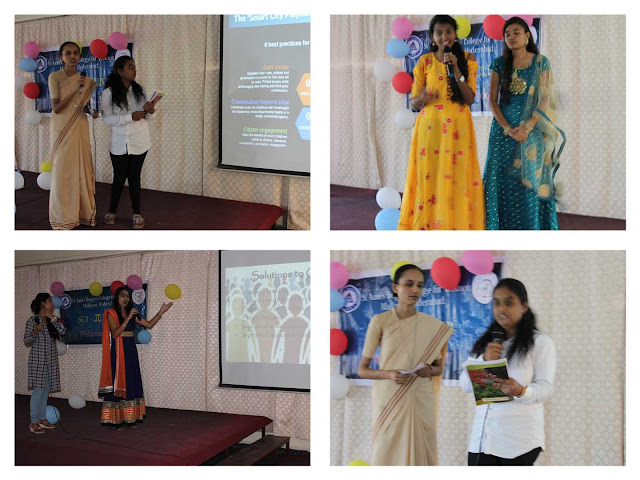 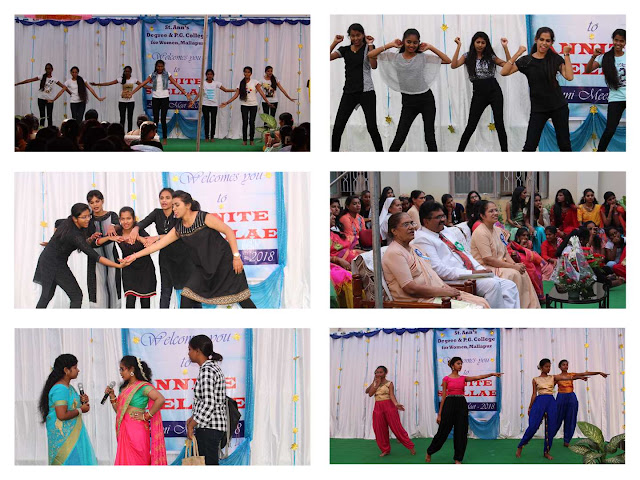 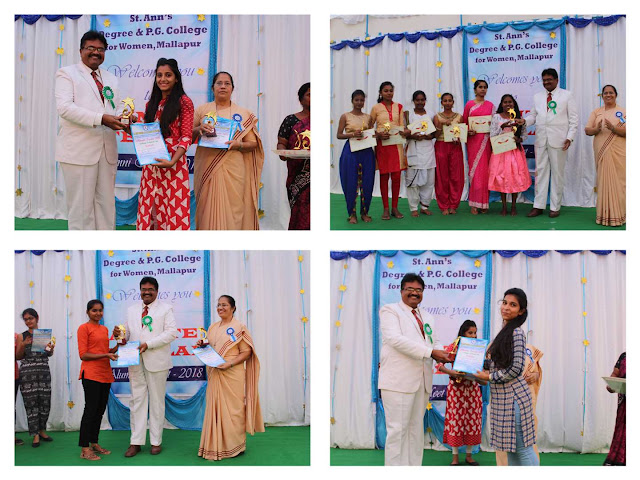 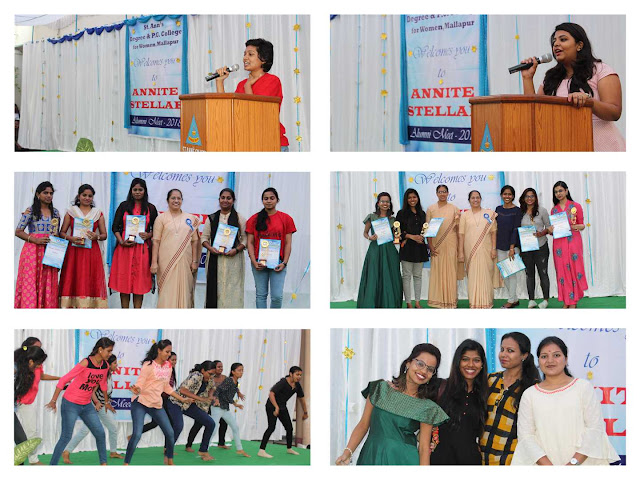 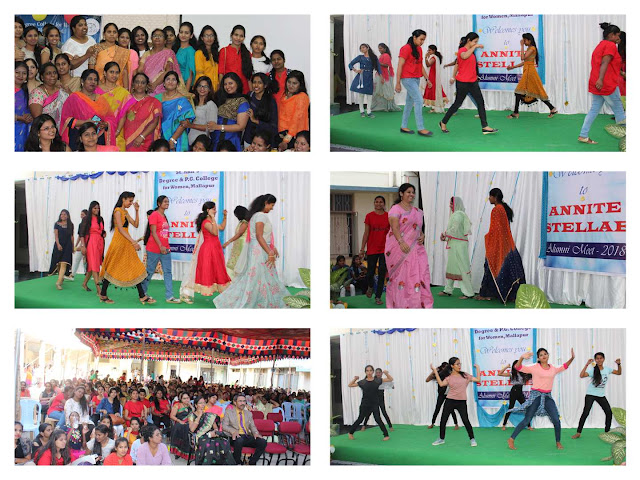 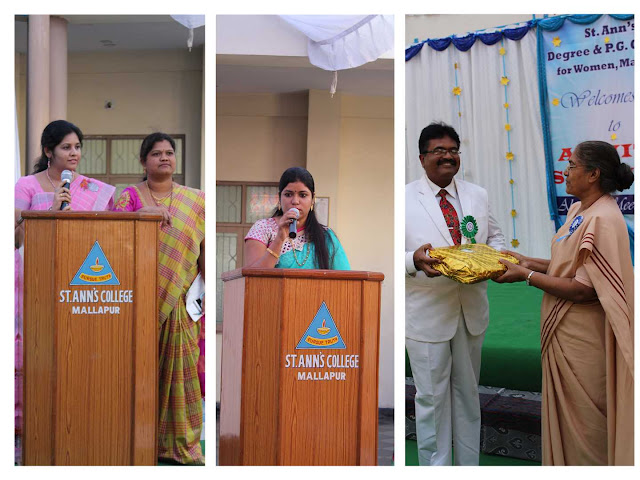 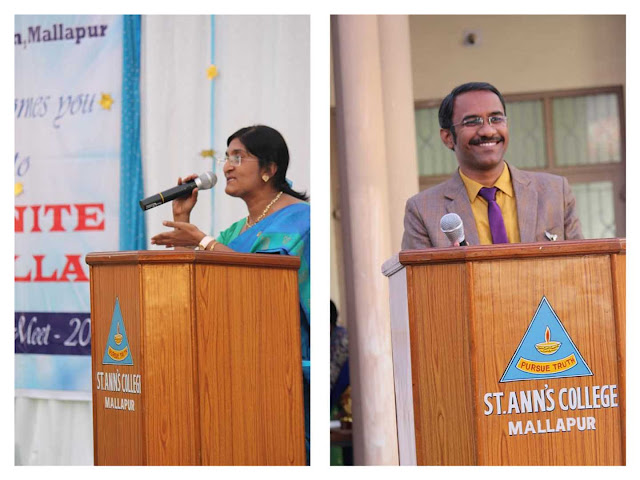 Posted by St.Anns Degree and PG College for Women at 13:31 7 comments: 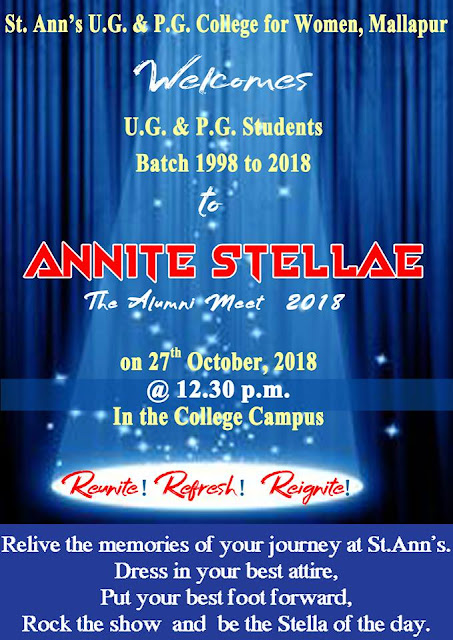 Posted by St.Anns Degree and PG College for Women at 09:48 3 comments: 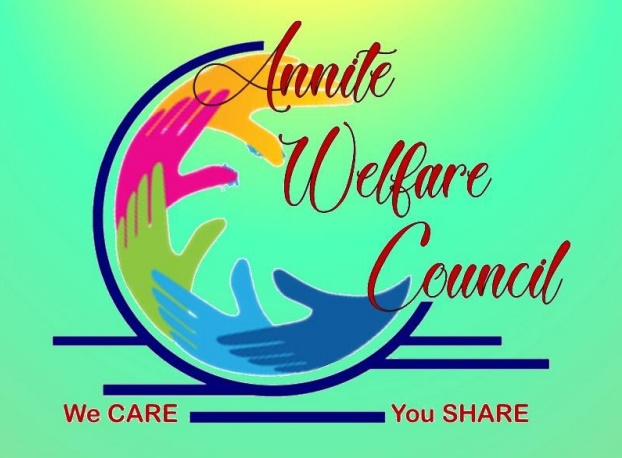 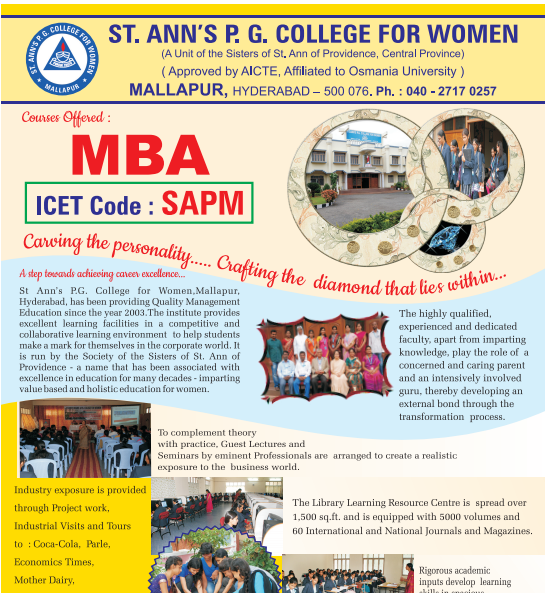 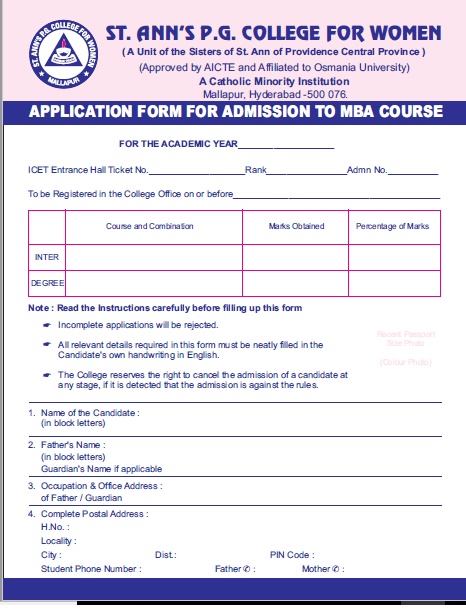 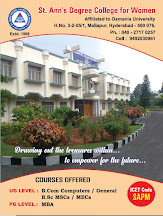 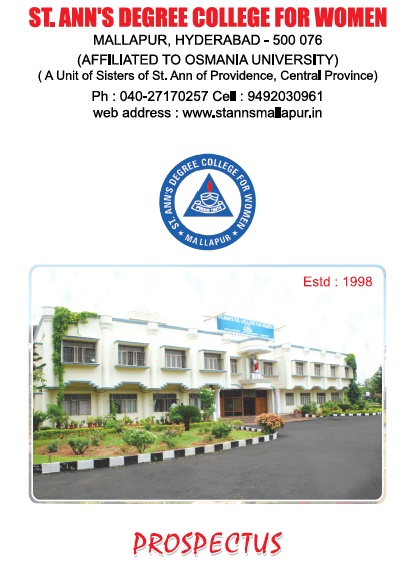